You'll receive our eNewsletter delivered right to your inbox!

A decline in manufacturing led to a change in focus for downtown Muskegon, and in the 1970s, a covered urban mall was built to anchor the new direction. However, the advent of suburban malls was not far behind and in 2001, the downtown Muskegon mall was closed and torn down, leaving a massive vacant property available for developers. Together with the Paul C. Johnson Foundation and the Muskegon Area Chamber of Commerce, we formed the Downtown Muskegon Development Corporation (DMDC) and bought the mall property. After extensive collaboration and community input, external and internal resources were leveraged to get the project started.

Learn more about the Foundation’s role in downtown redevelopment through impact investing in this video featuring Gary Post of Port City Construction and Development Services. 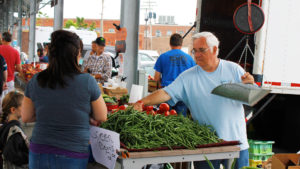 The new market also features Kitchen 242, a professional, commercial kitchen that is a rent-able facility for food business entrepreneurs to prepare their products in and a space where cooking classes and culinary events can be held to enhance community awareness of good nutrition.

In summer, the market draws over 100 West Michigan vendors and brings thousands of people to downtown Muskegon each week, while providing access to healthy food in our urban core.

As a major funder of the new Muskegon Farmers Market project, we also sought outside funding resources, advocated for state support, and worked closely with donors to share opportunities for support from their donor advised funds. We continue to be committed to the Muskegon Farmers Market through grant funding and donor support along with community advocacy and downtown engagement. 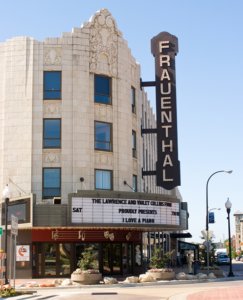 Originally known as the Michigan Theater, the Frauenthal Center was built in 1929 by Muskegon’s movie mogul, Paul Shlossman, under the direction of famous theater architect, C. Howard Crane. The architectural styling of the theater is Moorish, or Spanish renaissance, and gleams with extraordinary gold accents, cherubs and griffins.

Built as a theater for “100% all talking motion pictures,” the theater built up a rich history as a glamorous entertainment destination, but by 1976  the wrecking ball loomed on the horizon. Fortunately, a large estate gift from local industrialist A. Harold Frauenthal allowed us to save the wonderful site, and the show went on. In 1995, Muskegon County voters passed a $16 million bond issue to restore the theater to its original glory. The 170-seat Beardsley Theater, a visual arts gallery and multiple reception areas were added during further renovations to the adjacent Hilt building.

Today, the historic Frauenthal Center is home to the West Michigan Symphony Orchestra, Muskegon Civic Theatre, and Muskegon Community Concert Association, as well as traveling road companies, concerts, and countless community events while also serving as the office for the Community Foundation for Muskegon County. The diverse facility hosts a number of conferences, meetings, trade shows, receptions and much more.  To learn more about the Frauenthal Center, visit their website at www.frauenthal.org.

Our commitment to the Frauenthal Center and its continued development includes providing over $100,000 in annual grants as a community investment to support this important landmark.

Thanks to a generous estate gift from a local industrialist, we were able to save this important historical site.

Read more about how we work together to make a positive impact for people throughout our shared community.

Every gift makes a difference.
Where and how is up to you.