You'll receive our eNewsletter delivered right to your inbox!

Muskegon celebrates the unveiling of ‘Mastodons on the Loose’ 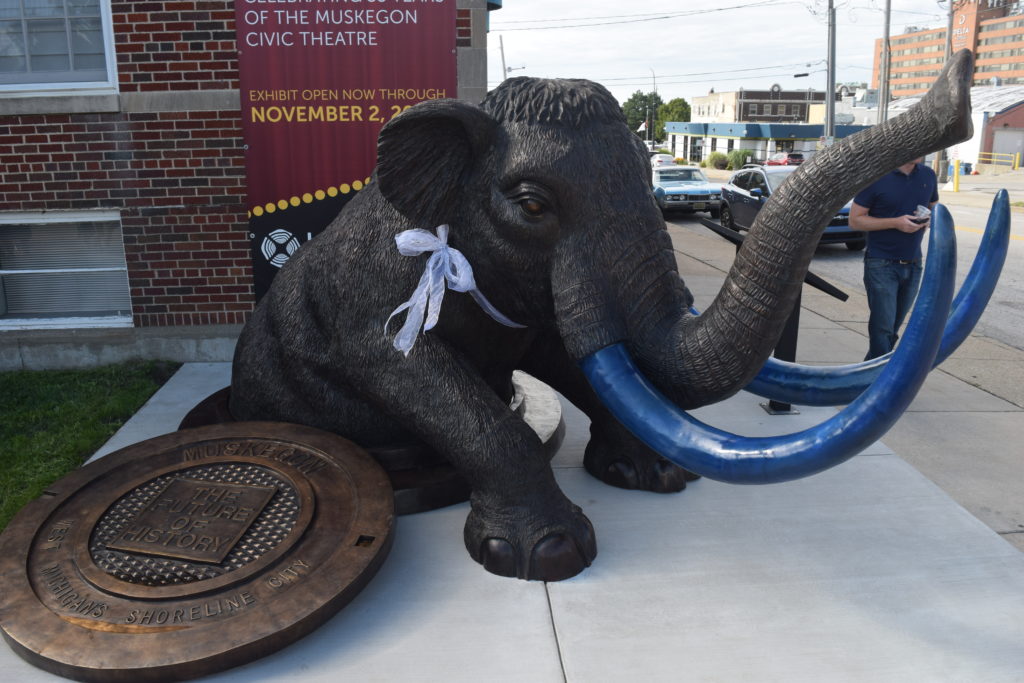 Mastodons are in Muskegon!

We were thrilled to join our community to celebrate the unveiling of “Mastodons on the Loose” at the Lakeshore Museum Center Thursday evening. The new public art project, which the Community Foundation was proud to support, features Moxie, a life-sized bronze mastodon seen breaking out of the museum at 4th Street and Clay, and 20 mini-mastodons that are scattered at sites throughout the downtown. (You can see a full list of the mini-mastodon sites by clicking here.)

The new public artwork is meant to reach its viewers on numerous levels, from connecting us to a history spanning thousands of years (mastodons roamed throughout Michigan about 14,000 to 10,000 years ago before climate change and overhunting by humans drove it into extinction) to inspiring residents and tourists alike to explore our downtown. Too, it prompts its viewers to check out the Lakeshore Museum Center—which, if you don’t already know, is free for all Muskegon County residents—and learn about the impressive expansion plans the museum has for its new building and programming.

“There will be a lot of blue in the new building, hence the blue tusks that bring attention to the mastodon,” Lakeshore Museum Center Executive Director Annoesjka Soler said at Thursday’s unveiling ceremony. “We’re looking to add more of a science component to our history museum, make it more hands on. That’s why Moxie was designed to be engaged with; we want people to interact with it.”

As for the name Moxie? That was chosen very intentionally, Soler explained.

“Moxie means energy, courage and determination, and I think that’s been a great description for this museum, which is 82 years old, and the courage and moxie it’s going to take to expand this museum,” she said.

Moxie and her babies are whimsical and fun, but they also provide a very real chance for us to pause and connect with our history, to remember that we are one small chapter in a story filled with the people, creatures and places that have existed before us—and the ones that will exist after us.

“We know at the Community Foundation that public art is about so much more than aesthetics; it helps create a sense of place, a sense of pride and identity, a sense of meaning for individuals in the city, and also a sense of uniqueness,” Janelle Mair, the Community Foundation’s Vice President of Community Investment, said at the unveiling. “Here in Muskegon in particular, the public art that’s been installed pays homage to our rich culture and history, it helps create inspiration for our future, and it tells visitors, residents and tourists alike who we are as a community. We’re a community that has dedication, has resilience, has hope for our future, and has moxie.”

This emphasis on  public art is for good reason. Public art is directly tied to economic development: it invites both residents and tourists alike to explore Muskegon. It draws people to museums, cultural venues and businesses. And it starts conversations—about history, about art, about Muskegon itself.

Those championing public art in the city note that, as with Muskegon’s natural surroundings, it makes beauty accessible to everyone; it connects us all to this land, to its stories and its history and its communities, those long gone and those still persevering. Public art has no barriers to entry; it not only allows anyone to see it, it encourages that. When you get down to it, that is what public art is all about: making culture accessible to everyone, inviting collaboration and important social criticism, and building a city for us all.

Sculpted by Gillie and Marc Schattner, a wife and husband duo from Australia who have exhibited internationally and whom the New York Times called “the most successful and prolific creators of public art in New York’s history,” the mastodons are the first project from the Muskegon City Public Art Initiative. Launched by philanthropist Patrick O’Leary in July 2018 and led by Hayner, the initiative aims to add up to 10 new significant works of art to the city of Muskegon; it operates under the auspices of the Community Foundation for Muskegon County in collaboration with the Downtown Arts Advisory Committee. The committee was created in 2005 by the Community Foundation’s president at that time, Chris McGuigan, and the Foundation’s former president, Patricia B. Johnson.

For Hayner, “Mastodons on the Loose” is the result of a Muskegon community that has long supported the arts.

“Many of you who are in the business of loving Muskegon know we have the most generous community there could be,” Hayner said during the unveiling. “It’s amazing what this community does.”

“This is a great project for our city,” she continued. “It’s going to create a lot of excitement, and a lot of people coming here to see everything that this town has to offer.”